Dear friends, We are happy to announce a charity action which is held on Our beloved brother Hank’s site. There you can change you US dollars to an original 2 cats bill. All the money received by this exchange will be given to the homeless animals shelter Rzevka in St.Petersburg, Russia, the city where We actually live. The new 2 cats bill feature Us, Zarathustra the Cat and Hank the Cat in its design: 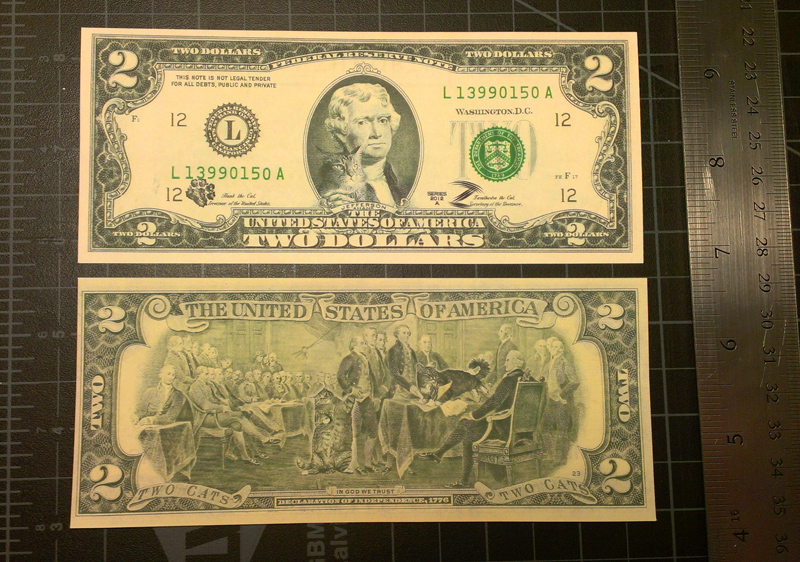 Hank is known for being the only politician who gives his money away, and now, he’s sending you money! At $1.50 each, these are a steal! Again, they can be found at http://hankforsenate.com/PrintStore.aspx. The bill is created and printed to be as close as possible to a real $2 bill, this ‘print’ measures 2.61”x6.14”, is double sided, and is 100% cotton. The front features Thomas Jefferson & Hank together, with both of their names listed below the image:

Hank’s miniaturized signature adorns the front of the bill, and he is listed as the “Treasure of the United States” (instead of Treasurer). We, Zarathustra the Cat, have  signed the right side as “Secretary of the Treasure”. In the boring world of humans this is NOT real currency, and the front clearly states that this is NOT LEGAL TENDER. On the back, one can find the famous, recently found John Trumbull’s Declaration of Independence (with cats). Hank sits proudly on the declarations, while We hold hands with Our good friend, John Adams. Just underneath the painting on both sides one can find the value of this bill to be two cats. And We hope that the real value will be much more cats lifes saved as the proceeds from this piece will benefit the cats rescue group – Rzhevka, a shelter for homeless animals in St. Petersburg, Russia (http://icat.spb.ru/)
Thus Russian influence to American dollar design get new mark in its history, that may be you don’t know well and you never dared to ask. Do you know that famous US philosopher Ayn Rand, who influenced a lot on american mentality, was born as Алиса Зиновьевна Розенбаум (Alisa Zinov’yevna Rosenbaum) in St.Petersburg, Russia, the city where Rzevka shelter save cats lifes now? Do you know that at Rand’s funeral attended by some of her prominent followers, including Alan Greenspan, a six-foot floral arrangement in the shape of a dollar sign was placed near her casket. This is the evident connection between dollar design and Russia. Do you know that famous Russian painter and philosopher Nicolas Roerich, a nominee to Nobel prize, influenced a lot on the design of the current one dollar bill? They say it was Roerich’s suggestion that the U.S. dollar bill contain the Great Pyramid seal of the United States. Well, others say it’s a myth, nobody knows for sure now. But the 2 cats bill is reality!
And while the leaders of USA and Russia are negotiating the weapons issues (ridiculous having in mind the evidence of the fact that we are all in the same boat), the cats-politicians are working hard to make our world a little bit better. This is the essence of cats politics. And if everybody will do just a little 2 cats step to the better world, it will lead to the global changes and men and cats and other animals will live again together in peace in the garden of Eden!
Thus speaks Zarathustra, the Cat. 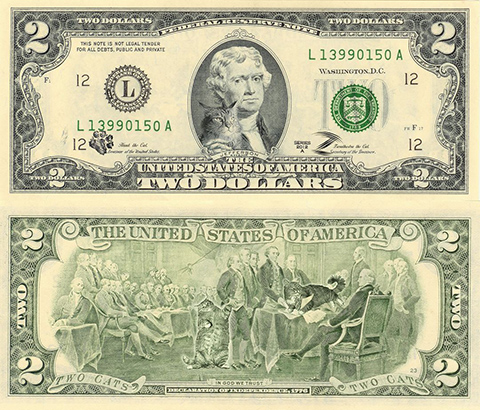 P.S. Now they say: Zarathustra is a real Fat Cat, he can haz his own curreency! You can also see the difference between fat cats in human world who think only about themselves, and fat cats in cats world who want all the cats to be well feeded.